Disease is a conviction, and I was born with that conviction

“and the wind whipped my throat” 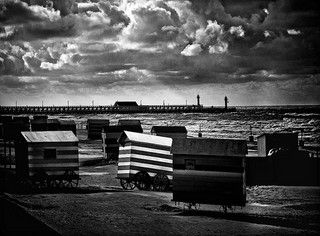 “and dense vegetation of desire, nothing between”

scientists plunge into matter looking for the
matter but the matter lessens and, looked too

far into, expands away: it was insubstantial all
along; that is, boulders bestir; they

are “alive” with motion and space: there is a
riddling reality where real hands grasp each

other in the muff but toward both extremes the
reality wears out, wears thing, becomes a reality

“realityless”: this is satisfactory, providing
permanent movement and staying, providing the

stratum essential with an essential air, the
poles thick and think, the middles, at interchange:

the spreader rakes a furrow open and lights a
drying edge: a priestly plume rises, a signal, smoke

like flies intermediating between orange peel
and buzzing blur: is a poem about garbage garbage

or will this abstract, hollow junk seem beautiful
and necessary as just another offering to the

high assimilations: (that means up on top where
the smoke is; the incinerations of sin,

coals; wind slams flickers so flat they lose
the upstanding of updraft and stifle to white

lingo–but oh, oh, in a sense, and in an
intention, the burning’s forever, O eternal

flame, principle of the universe, without which
mere heaviness and gray rust prevail: dance

peopling the centers and distances, the faraway
galactic slurs even, luminescences, plasmas,

those burns, the same principle: but here on
the heights, terns and flies avoid the closet

precincts of flames, the terrifying transformations,
the disappearances of anything of interest,

where only special clothes and designated
offices allay the risk, the pure center: but

down, down on the lowest appropinquations, the
laborsome, loaded vessels whine like sails in

too much wind up the long ledges, the whines
a harmony, singing away the end of the world

or spelling it in, a monstrous surrounding of
gathering–the putrid, the castoff, the used,

the mucked up–all arriving, for final assessment,
for the toting up in tonnage, the separations

of wet and dry, returnable and gone for good:
the sanctifications, the burn-throughs, ash free

merely a permanent twang of light, a dwelling
music, remaining: how to be blessed are mechanisms,

procedures that carry such changes! the
garbage spreader gets off his bulldozer and

approaches the fire: he stares into it as into
eternity, the burning edge of beginning and

ending, the catalyst of going and becoming,
and all thoughts of his paycheck and beerbelly,

watch, fall away, and he stands in the presence
of the momentarily everlasting, the air about

him sacrosanct, purged of the crawling vines
and dense vegetation of desire, nothing between

perception and consequence here: the arctic
terns move away from the still machine and

light strikes their wings in round, a fluttering,
a whirling rose of wings, and it seems that

must have been designed after angels or angels
after them: the lizard family produced man in

the winged air! man as what he might be or might
have been, neuter, guileless, a feathery hymn:

the bulldozer man picks up a red bottle that
turns purple, sung drunk, the singing

not even puzzled when he tosses the bottle way
down the slopes, the still air being flown in

in the bottle even as the bottle dives through
the air! the bulldozer man thinks about that

the deepdown slopes, he realizes, the light
inside the bottle will, over the weeks, change

the yellowjackets, unharmed, having left lost,
not an aromatic vapor of wine left, the air

percolating into and out of the  neck as the sun’s
heat rises and falls: all is one, one all:

hallelujah: he gets back up on his bulldozer
and shaking his locks backs the bulldozer up

You are currently browsing the A. R. Ammons category at Departure Delayed.